Time to Hand Over the Director Shirt 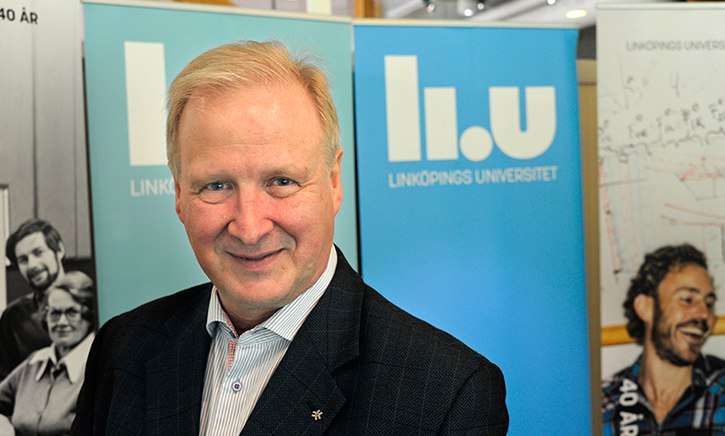 The 28th of May 2015, a press conference was held at Linköping University, the big news – the largest research program ever in Swedish history was to start. And the one to bring it to reality was professor Lars Nielsen. After five years as WASP Program Director it is now time for Lars to withdraw to his own research and other assignments.

The WASP program has made an extraordinary voyage during its first five years. In late 2014, a selected group of people from four leading ICT universities in Sweden – Linköping, Chalmers, Lund and KTH, was asked by Mille Millnert, to write an application for a research program on the scope of autonomous systems and software.

”Mille had performed a pre-study on strategic research subjects suitable for investment on behalf of KAW, and this scope was very interesting to go further with. I was the selected person in Linköping for a national group of writers. The entire writing process was a great teamwork and in four months we had the final version.”

It was during this process in spring 2015, in a meeting with Linköping vice-chancellor Helene Dannetun and Mille Millnert that Lars Nielsen got the question. If the application would be approved by KAW, did he want to take the role as Program Director?

“My answer was yes, right away. This was such an appealing assignment. I had been Head of Department for 12 years; it was a good time to try something new.”

Later in spring 2015, Lars and Mille visited the KAW board meeting where the WASP application was on the table for decision. It was approved with a 1,3 billion SEK grant. At the 28th of May, the WASP program was announced with Linköping University as hosting body, Mille Millnert as Chair of the board and Lars Nielsen as Program Director.

Since then, WASP have had its trust from KAW renewed in several steps, materialised in a rapid growth of budget and expansion of the program. A step of bigger proportions was made in 2017 when an additional billion SEK was granted for expanding with an AI-track.

“We had some AI research in the program already from the beginning but with KAW’s jubilee-grant in 2017 AI became an equal part of the program next to autonomous systems and software. It was also with this change that the name of the program got AI added to it.”

The next big change was officially (and coincidental) announced at Lars birthday, the 21st of November 2019. The program once again received a spectacular amount of additional funding, 1,3 billion SEK, and was prolonged until 2029.

“With the last addition, WASP is three times the size in budget compared to when we started – 5,5 billion SEK. All the way our work has been done in the best sense of cooperation between all parties, and I believe that KAW appreciates how we have managed the program. It is now a good time for someone else to take over and develop the organisation to the next level.”

To Construct a Top-Level Research Program from Scratch

It is some very impressive achievements that Lars together with the management groups have pulled off in these five years. Among these: the development of the graduate school, an ambitious recruitment program with the aim to start 60 new research groups in Sweden, foundation of the research arenas, and closing memorandums of understanding with Stanford, Berkeley and NTU Singapore.

“Our initial focus was to create a high-profile, nationally distributed graduate school, one of its kind. In the centre of our planning stood the exclusive course program, community-building and close cooperation with Swedish industry. Then the other instruments, as we call them, were developed in parallel.”

An achievement Lars is very pleased with is the processes WASP has setup for recruitment of doctoral students and senior researchers. According to him, the close collaboration between universities putting the benefit for Sweden in the foreground, is a unique process.

“For each call, our partner universities have focused on how to maximise the benefit for Sweden when distributing projects and what research profiles to look for. The recruitments have in that sense been done in understanding and not in competition with each other.”

The collaborative and friendly spirit is something Lars Nielsen keeps coming back to.

“Of course, there have occasionally been some requests and questioning, but my feeling is that everyone wants this to work and so, many processes have run pretty smoothly. It has been a very interesting experience in my role as Program Director to balance this.”

Withdrawal but not Retirement

His last year as Director of Sweden’s largest research program ever has consisted of hard work and introducing his successor, Anders Ynnerman. Because of the large amount of work this last year has demanded, they soon decided to split assignments between each other. Lars has continued to take care of the everyday work while Anders has been focusing on strategic questions regarding the future development of the program.

“I guess it wasn’t really an introduction period for Anders, but he has been in the program since the start, so he is quite familiar with most things already. I am firm in my feeling that everything in the program so far have worked out very well and so it will continue, even without me.”

The 30th of June, Lars does his last day as Program Director for WASP and even though retirement could have been an option, that is not really what he intends to do.

“I will return to my professor position and my own research. I have many ideas that needs to be investigated and done before I leave. It feels very inspiring and I’m really looking forward to it. I’ll also stay in the board of our sister program WASP-HS for as long as they need my advices on how to build a large and complex national research program.”