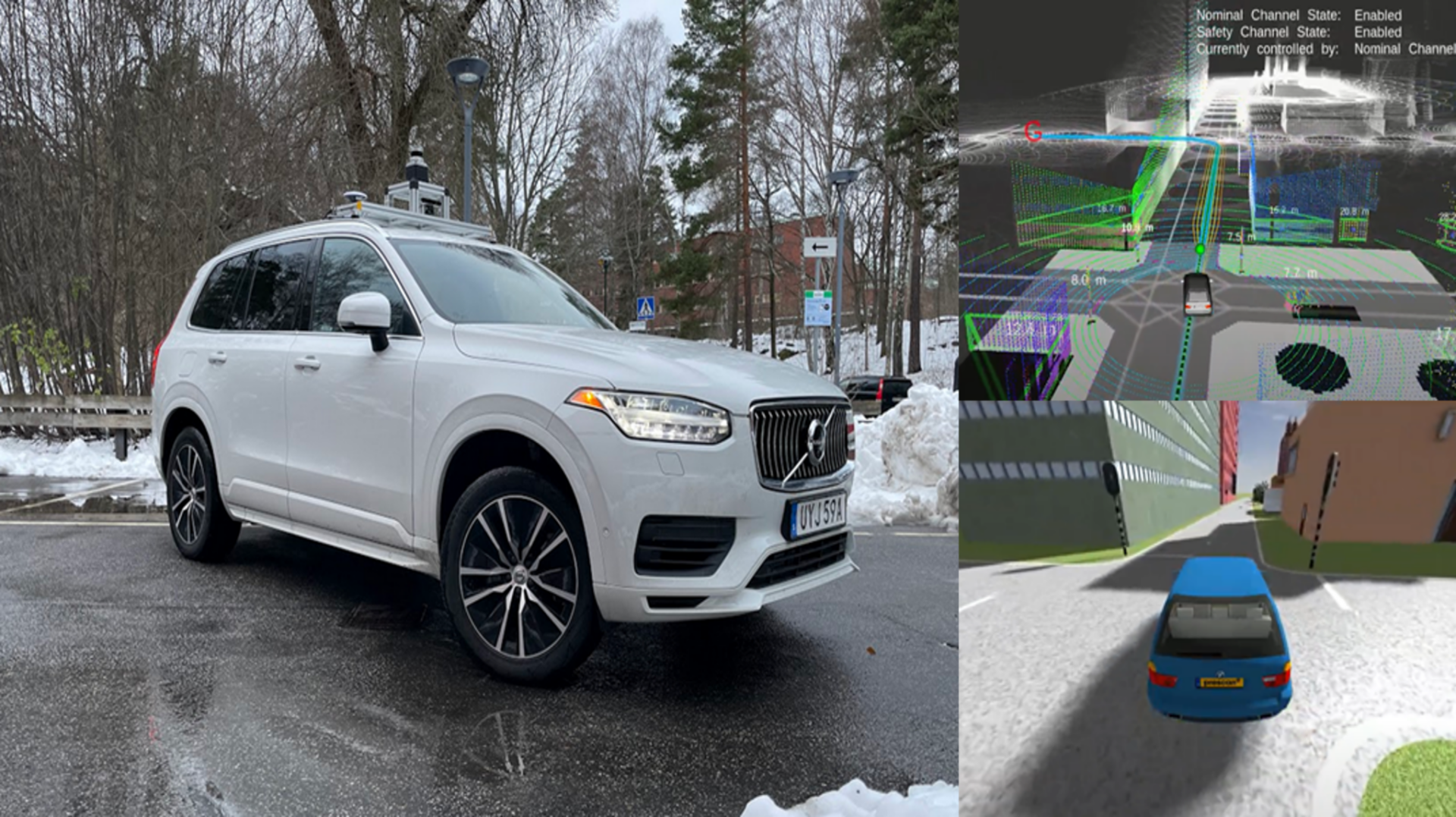 The AD-EYE testbed aims to simplify the process of testing new WASP developments in the fields of Automated Driving (AD) and Intelligent Transportation Systems (ITS), primarily for the purposes of systems and functional safety, but also with relevance for other aspects of AD and ITS.

– The WASP Industry Bridge project has provided timely support for the maturation of this testbed, says Martin Törngren, Professor at the Division of Mechatronics and Embedded Control Systems at KTH Royal Institute of Technology.

Automated Driving (AD) and Intelligent Transportation Systems (ITS), are very large and complex tasks, requiring a multidisciplinary approach. AD-EYE is a testbed for AD and ITS, developed and maintained by the Division of Mechatronics and Embedded Control Systems at KTH Royal Institute of Technology, initiated by Naveen Mohan (WASP affiliated PhD student) and Professor Martin Törngren.

-The goal of AD-EYE is to aid researchers to overcome hurdles in making the transition from lower to mid/high Technology Readiness Level (TRL) levels, especially challenging for research in safety critical fields such as AD and ITS, says Martin Törngren.

Usual hurdles are, for example regulatory requirements, lack of open data, approvals of the Swedish Transport Agency (Transportstyrelsen), or that multidisciplinary collaboration is required.

AD-EYE aims to simplify the process of testing new WASP developments in the fields of AD and ITS in realistic conditions on public roads, easier with a reference implementation, and safer with an approved safety case and process:

-The goal is for the modular reference implementation to be selectively used or improved by the individual researcher for them to keep their focus on their research interests, while still using the rest of AD-EYE testbed implementation and resources, says Martin Törngren.

The planned resources to be made available are of different types such as the ability to drive on public roads on KTH campus, access to sensors, computer hardware, workstations, open data, proprietary data and communication. The testbed will operate as an approved site by the Swedish Transport Agency on the public roads at KTH campus and targets L2 (Partial Driving Automation) through L4 (High Driving Automation) levels of automated driving including collaborative AI-based ITS relying on multi modal communication and edge computing:

-The long-term goal of the testbed is to transform the KTH campus into an innovation arena while providing realistic testing conditions to improve the quality of research performed by WASP in the field of AD and ITS, says Martin Törngren.

At the start of the WASP Industry Bridge, the AD-EYE testbed provided simulation, physical and mixed reality modes of operation, as well as test automation allowing for nominal, safety, and security testing scenarios. Scenarios included fault injection and cyber-attacks, benefitting from mixed mode setups, from simulation over vehicle in the loop to fully physical setups.

During the WASP Industry Bridge, several milestones have been accomplished, including the acquisition of a loaned vehicle to be used as an Autonomous Vehicle (AV) platform as well as purchasing and integration of new sensors in the vehicle, such as a Lidar, satellite navigation systems (GNSS-RTK) and a camera.

During the WASP Industry Bridge, the AD-EYE team has acquiesced a new vehicle to be used as an Autonomous Vehicle (AV) platform, and integrated it with new sensors, such as a Lidar, satellite navigation systems (GNSS-RTK) and a camera.

-We have developed a prototype Road Side Unit (RSU) and initiated work on 5G and edge computing at the KTH campus to be integrated in the testbed. A smart digital infrastructure as provided by 5G and edge computing, promises to address some of the hurdles towards connected automated vehicles. We here have the opportunity with strong synergies with the Vinnova Center for Trustworthy Edge Computing Systems and Application (TECoSA), says Martin Törngren.

In addition, the WASP Industry Bridge has enabled start of new collaborations with Industrial partners:

-The WASP Industry Bridge project has provided a very timely support for engineering resources for expanding the development of the AD-EYE testbed. While many companies are pursuing testing, there is a shortage of open research testbeds, which we are targeting with AD-EYE, says Martin Törngren.

Trials on the public road

Currently, several researchers at KTH are planning to make use of the testbed. Applications include experiments related to AV occlusion handling, collaborative awareness (AVs and infrastructure collaboration), safety concepts for collaborative awareness, and reference architectures for connected AVs. Moreover, the conversion of the vehicle into an AV platform is in progress and the application to the Swedish Transport Agency for trials on the public road is being prepared:

-During the next year, AD-EYE will aim to have 5G-connectivity and fully integrated, edge-computing capabilities installed, approval for testing from the Swedish Transport Agency, and execute the first demonstration on the public road at the KTH campus, says Martin Törngren and concludes:

-The funding of engineering time provided by WASP Industry Bridge to AD-EYE resulted in positive progress in the development of the testbed capabilities and in bringing new collaboration between industry and research groups in the fields of AD and ITS.

The WASP Industry Bridge instrument supports initial steps in forming foundations for research collaborations between academy and industry. A call for Industry Bridge was open until January 10th 2023.