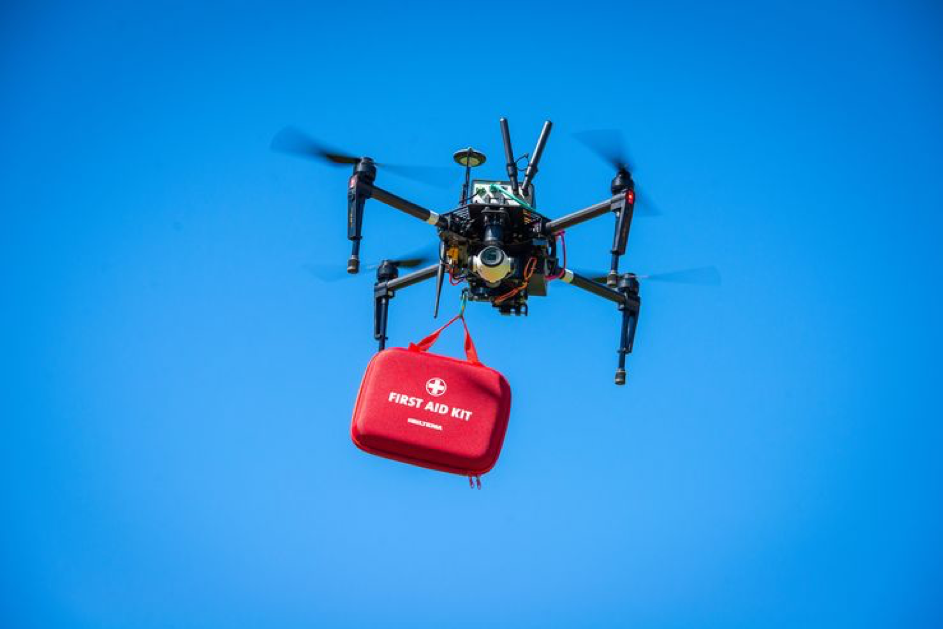 A quadracopter is in the air prepared to drop an emergency kit to a distressed person. Photo: Magnus Johansson

A couple of quadrocopters are buzzing around overhead, autonomously following two Pirayas out in the bay. The quadracopters and Pirayas takes photographs and maintain contact with the boats. One of the quadcopters drops a first-aid kit down to a person in trouble in the water. It only takes the drone about a minute to find the target and drop its payload less than a metre from the distressed person, today represented by a buoy.

Executing large scale demonstrations require their preparation. During the recent WASP WARA-PS demonstration, forty-five people gathered at Gränsö Manor in Västervik. Objective – three days of sharing experiences and inspiration, and to prepare for the autumn’s big public safety (WARA-PS) demonstration. On site where representatives for Ericsson, Axis Communications, and several of Saab’s subsidiaries, together with researchers from KTH (Royal Institute of Technology), Linköping University and Lund University.

Inspiration for the bigger test

Ivan Stenius, head of research at SMaRC, an arena for underwater vehicles coordinated by the Royal Institute of Technology, was there. Together with his colleagues, he was there to watch, learn and discuss the possibility of creating a common rescue scenario for the autumn exercise. This scenario would contain autonomous collaborating rescue vessels in the water, unmanned underwater vessels and flying drones, with humans also being part of the picture. 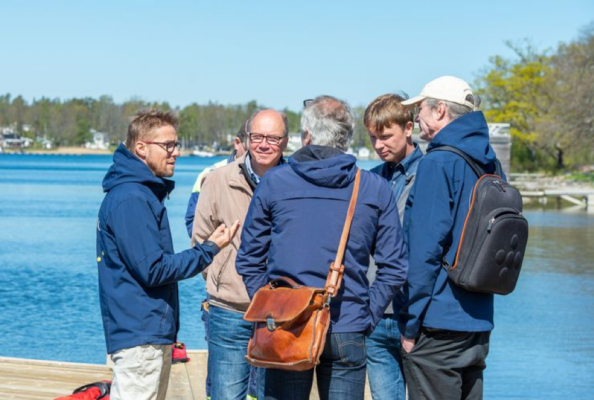 Ivan Stenius and his colleagues from SMaRC in conversation with Lars Rundqwist and Jesper Tordenlid. Photo: Magnus Johansson

“Our projects have a lot in common: we combine research and development and we have several similar research questions. We also want to get scientists out into messy real-life situations, away from the idealised computer models we normally work with”, he says.

Lars Rundqwist, Saab Aeronautics, led the initial study in preparation for WARA PS, and designed the sea rescue situation that the group is following.

“We have built the complete system using standard products: simulation systems and case-management systems from Saab, communication using cloud-based systems from Ericsson and Microsoft, delegation organisation from LiU, camera technology and communication from Axis, etc. Here, it’s a case of getting the software systems to work together. We are also using the mobile phone network, so we’re going to have to get Telia involved in the project at some stage”, he says.

Lars Rundqwist is the one who is responsible for the overall picture: he sees how everything fits together. So far, so good.

“But several challenges remain, when the doctoral students are to connect their research to the overall system. They shouldn’t have to spend 6 months coding in C++ to make it work. We have to make it easier for them, and hat is one purpose with WARA in WASP.”

“Remember – we support research by offering actual equipment and a true-to-life environment outside of the ideal world depicted in models. Reality is always slightly more complex than we realise. We’re familiar with making approximations, but here we can find out things that we didn’t realise that we had to include in the model. We also create knowledge in this way”, says Lars Rundqwist.

“Huge amounts of engineering will be required to make this work. We get a lot of help from students’ degree projects, several of them are here, as are also eight WASP doctoral students from two different entry groups. At most, we were 45 people – meeting, collecting information, building on previous collaboration, and inspiring each other.”

“I’m really looking forward to the exercise in September.”

This is a shortened text based on Monica Westman Svenselius’ article, full text is available at Linköping University.