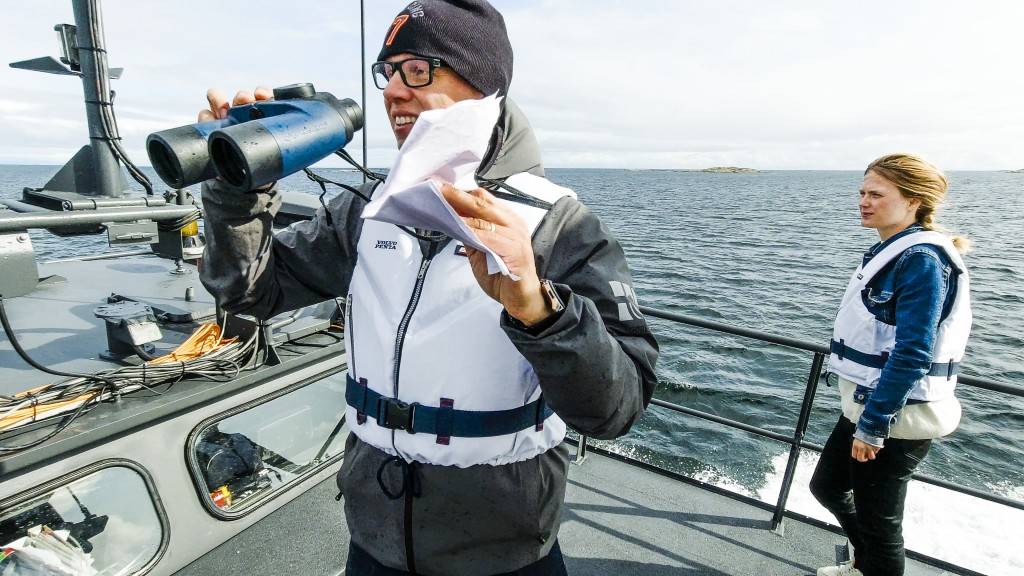 A few minutes after 3 pm, on the 18th of September, an emergency centre at Gränsö, a small peninsula on the Swedish east coast, receives an alarm. There’s been a possible accident out on the water.

Immediately an orange delta-winged drone is sent on a reconnaissance mission over the archipelago. The drone discovers an area of interest in the water and sends the coordinates of the location to two quadcopters stationed nearby. Together the quadcopters methodically search the zone of interest. Soon they identify people in the water and order a rescue boat, an unmanned “Piraya”, to help them.

On the shore, a crowd is following the events in the air and at sea with great interest. The alarm is not real, and this is a demonstration of WARA-PS, WASP’s research arena for public safety. All vehicles participating in the rescue operation move and make decisions autonomously. The purpose is to show how autonomous drones and boats, guided by artificial intelligence, can be used in rescue operations at sea.

This is the second time researchers and industry representatives from WASP have gathered for a demonstration at Gränsö. The around 100 participants come from SAAB, Combitech, Axis Communication, Ericson, SSRS and seven Swedish universities. In addition to taking part in the rescue demonstration, many of them are here to gather data for further experiments.

Pontus de Laval, advisor and former CTO of SAAB and WASP board member, considers cooperation between researchers and industry one of the key strengths of WASP.

“That a research program has these types of meeting points between universities and industry is unique. It’s rare for companies to both work with each other and with universities this well. One reason why this is so successful is because of our tradition here in Sweden with Industry PhD students, employees that are given the possibility to do their PhDs during work hours”, Pontus de Laval said.

One of the Industrial PhD students at WASP is Mårten Lager. He works at Saab Kockums, while doing his PhD at Lund University.

“Through WASP you get access to several different platforms for your research. Another advantage is the personal network WASP gives you. A lot of people here are researching topics similar to mine. We learn from each other.”

“WARA has helped me a lot. My research is about autonomous boats, and the archipelago here at Gränsö is a great place to drive a boat around to gather data. I’ve used both the Combat Boat 90 and the Pirayas that are available to us”, said Mårten Lager.

Not only researchers gain from the cooperation, it’s also advantageous for industry, Pontus de Laval points out.

“An important task for companies is to understand how mature a new technology is. When can we start to use it in our products? The demonstrations in WASP answer that question. What we’re doing here is of benefit for both industry and researchers”, said Pontus de Laval.

“The Piraya” races to the rescue.

For Gunnar Bark, the WARA director, WARA is where the researchers get to try their research in real life.

“WARA is a place where we demonstrate the research done in WASP. PhD students and their supervisors have developed their algorithms for many years and can show their results here.”

“When industry gives the researcher access to equipment that isn’t available at the universities, it creates better research and better researchers. If you use real data in your paper, it will most likely be better. An important goal of the program, maybe even the most important goal, is to create better PhDs”, said Gunnar Bark.

Linnea Persson is a PhD student at KTH Royal Institute of Technology. She doesn’t participate in the demonstration, instead, she is at Gränsö to gather data.

“My research project is about autonomous landings. I’m trying to land an autonomous drone on a boat that’s moving at high speed. Right now, I’m working on getting the relative positioning right”.

Gunnar Bark adds one last thing he considers important about WARA. That the participants are enjoying themselves.

” Mille Millnert, the WASP chairman, said last year when he was here ‘The demo was very exciting, but I wonder if not the friendly atmosphere and the networking going on here are even more important’. Researchers and engineers have a lot in common and get along well. That is why the mood here is so good”, said Gunnar Bark.